Eligible for membership?
Looking for a better place for your financial future?

Women in law enforcement currently consists of 12% police officers and 3% of police leadership in the United States. While the percentage of women police officers has increased over the years, these statistics are very low. Research indicates that there are many advantages of having women representing our law enforcement. We want to honor and recognize women who have put their lives on the line for the safety of our communities.

History of Women in Law Enforcement

Prior to the 1900s, it was unlawful for women to serve as police officers. The earliest records indicate that women worked in jails cleaning cells, or would work directly with female crime victims. In the early 1900s, it became more common for women to hold the title of police officer.

Lola Baldwin became the first sworn woman police officer in the U.S. in 1908. In 1916, Georgia Ann Robinson became the first African American female officer. It wasn’t until the 20th century when the Civil Rights Act of 1964 gave women the rights to serve in police leadership positions. 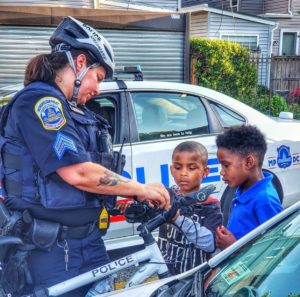 Diversity in professional organizations carry benefits like collaboration, faster problem solving, and better decision making. Diversity in the police force has its benefits, too. Women police officers bring unique advantages to law enforcement such as:

How to Thank a Woman Police Officer

Police officers protect our communities and deserve recognition for their sacrifices. There are several ways that you can thank women police officers. A little bit goes a long way. Here are a few ideas to show thanks: 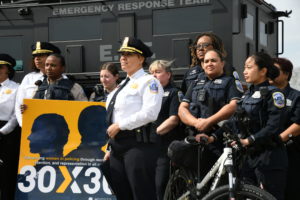 The Future of Women in Law Enforcement

One police agency that we know and want to recognize is Metropolitan Police Department D.C. (MPD) which has a remarkably diverse department, including one in four women police officers. MPD is one of the national leaders of women in blue.

National initiative 30×30 has an ultimate goal of increasing the representation of women in law enforcement to 30% by 2030. On their website, you can find a list of participating agencies who have signed the pledge to carry out the initiative.

Thank You for Your Service!

From all of us at the Police Federal Credit Union, THANK YOU  to all the women and men who have put their lives on the line to protect our communities. To the women in blue, we give a special thank you for the unique gifts and qualities you bring to the industry. You have all our respect.

While this post was specifically recognizing women in law enforcement, we genuinely care and have utmost respect for all the men and women in blue. At Police FCU, we provide all banking needs for the law enforcement community. We are a full-service, not-for-profit financial institution. Become a part of our family!

You are now leaving Police FCU

Police FCU provides links to web sites of other organizations in order to provide visitors with certain information. A link does not constitute an endorsement of content, viewpoint, policies, products or services of that web site. Once you link to another web site not maintained by Police FCU, you are subject to the terms and conditions of that web site, including but not limited to its privacy policy.

You will be redirected to